I really enjoyed this novel.  It’s a family saga, set on a farm in western Missouri during the first half of the twentieth century.  Matthew and Callie Soames marry as young people and build a life together.  In time they are blessed with four daughters:  Jessica, Leonie, Mathy and Mary Jo.  The story opens with the grown daughters visiting their elderly parents during the summer, as they usually do.  It proceeds with sections narrated by each family member, and gradually the reader learns about the secrets, disappointments, and tragedies of their life together. 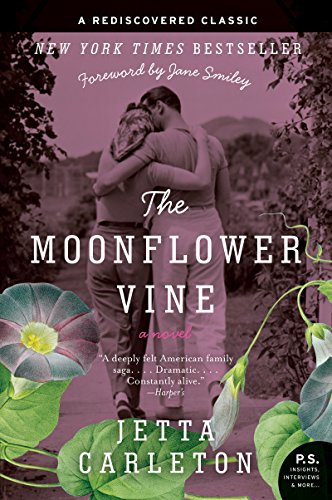 Most wouldn’t call this Christian fiction, but one reviewer says “sin is a constant presence.”  Each person in the family has sinned and been sinned against.  Yet they manage to persevere, forgive and move on.  In the manner of the time in which the book is set, faith and morality are evident, although not often discussed.  Still, each character grapples with their own practical and spiritual struggles.  The Soamses are portrayed as God-fearing, midwestern Methodists, with a strong sense of right and wrong.

Written in 1962, The Moonflower Vine, was Jetta Carleton’s only novel.  It’s been described as “a rediscovered classic.”  I’m glad I found it.

2 thoughts on “The Moonflower Vine by Jetta Carleton–Book Review”