Maybe this seems like a morbid topic, but for all of us, death may not be imminent but it is certain.  I lost a close family member recently — he died unexpectedly, in his sleep.  I said to my husband, “isn’t this the best way to die?  No drawn out painful last illness, no time to dwell on what we’ve lost or won’t get to accomplish.”   His answer was, “not really.  I think I would prefer to have a chance to say good bye and tell people all the things I hadn’t gotten around to saying.”

That made me remember Jesus.  He knew he was going to die.  He told his disciples clearly, over and over, although they never seemed to quite believe Him.  On his final day he took some specific actions: 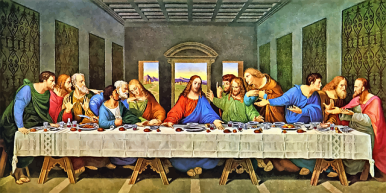 We’re not Jesus and we don’t know exactly when our last day will arrive:

“No man has power to retain the spirit, or power over the day of death.”  Ecclesiastes 8:8

However, in all things, we should strive to imitate Him.  John tells us:

Death is a sure thing.  Let’s focus on Jesus and make our death a good one, whenever it comes. Say and do the things that are important, now.  Don’t wait.

For more about death see these posts:

The Darkness of Death

“And thus this man died, leaving his death for an example of a noble courage, and a memorial of virtue, not only unto young men, but unto all his nation.”  2 Maccabees 6:31

This verse was part of my devotional reading last week.  If you’re Lutheran, you won’t find the book of 2 Maccabees in your Bible and it will never appear in the weekly lectionary.  That’s because it’s part of the Apocrypha.  These writings were regarded by Martin Luther as helpful for study, but not part of the accepted canon of Scripture. If you’re interested you can find the apocryphal books in the Jerusalem Bible, used by Catholics.  The books of 1st and 2nd Maccabees contain a history of some Jewish warriors who rebelled against the Seluecid Empire (a Hellenistic state) when these rulers were persecuting the Jews by forcing them to transgress Jewish religious laws. The idea was to make the Jews become more “Greek” and blend in with the rest of the population. End of history lesson.

The title of the section this verse concludes is “The Martyrdom of Eleazar.”  Eleazar was a teacher of the law and he refused to even pretend to eat pork because he said this pretense would be a bad influence on others, especially younger people.  He chose to be martyred for his disobedience to the authorities saying,

“Therefore if  I am man enough to quit this life here and now, I will prove myself worthy of my old age, and I shall have left the young a noble example of how to make a good death, eagerly and generously, for the venerable and holy laws.”  2 Maccabees 6:27-28

My good friend, Rob, died recently after a brief bout with cancer and he also made a good death.  No, he was not a martyr, but he left us an example of personal generosity and devotion to his faith.  The last time my husband spoke to him, his concern was not for himself (he knew where he was going), but for his family, friends and church.  When my end comes, I hope I meet it with the same confidence and trust Rob had;  and I hope I leave behind an example for others as inspiring as his.  Thank you Rob!

Below is Rob’s picture with the Lutheran Ladies and our Little Free Library.