If you’ve never read a book by Lauren Winner, run out and get one now!  She is not only articulate, her topics are well researched, and she is honest and open about her own struggles with leading a faithful Christian life.  Her first book, a memoir entitled Girl Meets God is the story of how she, a young Jewish woman, converted to Christianity. 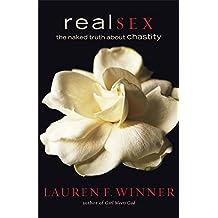 Anyway, real sex, seemed an obvious choice for this month’s topic and exploring the theme of eros love.  Subtitled “the naked truth about chastity” the book begins with Winner’s attempt to work through the difficulty she, and other people, even Christians, have in maintaining chastity.  Somewhere along the line she realizes that you cannot discuss chastity without discussing marriage — chastity isn’t a virtue or discipline to practice for the sake of avoiding something bad or harmful — it’s to be practiced in order to understand what marriage and becoming one flesh is meant to be and to represent in the Christian community.

Here’s a quote from the book:

“When I see them (a married couple she knows who have their share of differences) I not only feel optimistic about the possibility of staying married, I also feel optimistic about the possibility of staying a faithful Christian, of not drifting from church when I grow bored or indifferent or angry.  I remember that the Bible tells me over and over that marriage is like the relationship between God and His beloved.  I am cheered.”

According to Winner, marriage is not just for the couple, it is for the community.  They are a sign that:

I have to admit, I hadn’t thought of my marriage that way before.  Perhaps we would all take marriage more seriously if we did. Our love for one another is an earthly example to others of God’s heavenly love for each of us.

Read the book for more.  You’ll be edified and challenged, and if you’re like me, you’ll want to read other books by this author.

“Let us rejoice and exult and give him the glory, for the marriage of the Lamb has come, and his bride has made herself ready;  it was granted her to clothe herself with fine linen, bright and pure–for the fine linen is the righteous deeds of the saints.  And the angel said to me ‘Write this:  Blessed are those who are invited to the marriage supper of the Lamb.'”  Revelation 19:7-9

I just finished a book that I picked up, never imagining it would have anything to do with our monthly theme.  It’s called real SEX (subtitle: the naked truth about chastity) by Lauren Winner.  I ordered it from the public library because I have read other books by this same author.  She was a Jewish girl who converted to Christianity, and her first book, Girl Meets God, is about that spiritual journey.  She is very honest in describing her own sins and struggles, and she tackles difficult theological questions in a way that, for me at least, clarifies and illuminates.

Lauren says she began real SEX determined to talk about the issue of premarital sex;  how it is a difficult teaching for all young, single people, and particularly for someone like her who was already sexual active at the time of conversion.  She didn’t intend to write about marriage.  However, as she got into her subject, she came to the conclusion that she couldn’t talk about premarital sex without talking about marriage.  That’s because the real reason to avoid sex outside of marriage has to do with what God intended marriage to be.

God meant marriage to have three qualities.  It is unitive — that’s the whole “one-flesh” idea.  Marriage is a school for learning how to become “one” in relationship with another person.  It is procreative — and therefore, the building block of the family and of society.  Finally, it is sacramental because it is a meant to represent the union between Christ and the church.  Check out this reading from Ephesians 5:

“For this reason a man will leave his father and mother and be united to his wife, and the two will become one flesh.  This is a profound mystery–but I am talking about Christ and the church.”

Marriage teaches us, the church, what the kingdom of God will be like in eternity– an intimate union with Christ.  With this idea, I’m finally going to come to the point of this post.  One of the authors’ conclusions deals with a question we’ve all had to deal with about heaven.  The fact that there will be “no marrying or giving in marriage.”  This has always bothered me.  After a long, life of being married to one man, in heaven he’ll be just another guy?  How can that be? It doesn’t seem right.  Well, as Winner explains, in heaven the only marriage will be between God and His church.  As part of the body of Christ, we’ll be joined to each other and to Him in a union that is so complete, we won’t need anything else.  Earthly marriage simply points to this greater unity we as believers can look forward to. It’s a way for us to practice intimacy and unity right now.  Awesome, isn’t it?

I’m looking forward to that Marriage Feast more even more now than I did before.  What about you?  Have you really thought about marriage in this way?  Does it help your understanding of Biblical teaching about marriage?  I’d like to hear others comment.