I’m not an especially visual person, and I haven’t had much training in art, so this book was a bit of a stretch for me, but a good one.  Author Juliet Benner worked for years as a docent in an art gallery, where she felt her work was “teaching people how to really see what they were looking at.”  When she subsequently became a spiritual director, she realized the potential benefit in showing people how to “read” works of art — especially religious art–as a meditation on a passage of Scripture.  This book features ten different paintings with a chapter on each one which walks the reader through this process 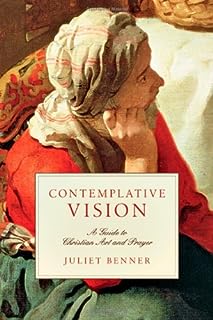 Each exercise includes reading the biblical text slowly, looking at the painting, trying to notice and enter into the scene, and concluding with questions for reflection. I used the questions for journaling.  At the end of the book there are suggestions for leading a discussion group with this method, or using it as part of spiritual direction.

I have to admit, I was amazed at how much I missed in examining a painting.  Ms.  Benner’s interpretations are very detailed.  She really does “read” the art.  So, it was an education for me in a technique that doesn’t come naturally.

VERDICT:  3 STARS.  I’m not sure this would ever become an easy or frequent method of prayer for me (I’m more of a word person);  but if you’re an art lover you may really enjoy using this as a form of prayer.  I would encourage everyone to at least give it a try–it’s always good to expand our horizons!

For more on art as prayer see:

Yesterday I got out a DVD I’ve had for a long time called “Be Still.”  It’s about contemplative prayer and features some well-known Christian authors like Beth Moore, Max Lucado, Richard Foster and Dallas Willard.  A major point in the discussion was that even when we pray we often don’t listen to God because we’re so busy talking to Him. We’ll never know God’s will for our lives if we don’t allow some space for silence, waiting and listening for His voice.

Of course the society we live in doesn’t exactly encourage quietness and rest.  “Multi-tasking” seems to be regarded as a virtue (what happened to focus or concentration on an important job?).  We live with what the DVD called “weapons of mass distraction”–smart phones, computers, ipods, net flicks.  We often don’t pay attention to one another or our surroundings, much less God.  We’re too consumed with our technology, our ability to get the answer we want, or the contact we need instantly.

I’m no better than anyone else at this.  I’m not as technologically connected as some, but I grew up in a family where working hard was expected and the biggest sin was being “lazy” (in other words, doing nothing).  I tend to fill up my days with one chore after another.  Prayer becomes just one of those chores to rush through on my way to the next thing on my list. Keeping my mind from racing is even harder than stopping my body.  I can be quiet, but I can’t be still.

God, however, invites us to rest in His presence, to be attentive to His voice.  How do you do this, ladies and readers?  I want to hear your suggestions.