Wow, it is hard to believe that it is already November. This month, the writers will delve into any topic they desire with no theme.

As we are nearing the end of the year, it is hard to believe that our lives have son significantly changed since March.

What changes have you gone through, what new or relived ideals are now a part of your life?

I realized that my life focus was totally skewed from where it needed to be.

What are your thoughts? Let me know, I am interested.

God Loves You And So Do I

“Traveling–seeing new sights, hearing new music, and meeting new people is exciting and exhilarating.  But when we have no home to return where someone will ask us, ‘how was your trip?’ we might be less eager to go.  Traveling is joyful when we travel with the eyes and ears of those who love us, who want to see our slides and hear our stories.

This is what life is about.  It is being sent on a trip by a loving God, who is waiting at home for our return and is eager to watch the slides we took and hear about the friends we made.  When we travel with the eyes and ears of the God who sent us, we will see wonderful sights, hear wonderful sounds and be happy to return home.”

This book is a discarded treasure I picked up recently in the local Salvation Army Thrift Store.  It caught my attention because the author, Pastor Dennis Whitmore, used to do a Christian radio spot with my husband, and I met his wife during my short stint as a substitute librarian for Washington County.

In the Bible, the Christian life is described variously described as a race, a journey, or a walk.  All of that implies direction.  To arrive somewhere, you have to travel in the right direction.  Pastor Whitmore has been traveling on his bike since childhood.  It’s given him time to muse about his beliefs and what it means to journey toward Christ.  In his brief essays he talks about the interesting people he meets (including John Glenn), little-know historical facts (the name Wheeling, as in W. Va. comes from an Indian word for ‘head’ and in the eighteenth century, Indians killed a man and put his head on a stake on the bank of the Ohio river as a warning — stay our of here!), and theology (after all, he is a Pastor).  Here are some of the things he has to stay about directions: 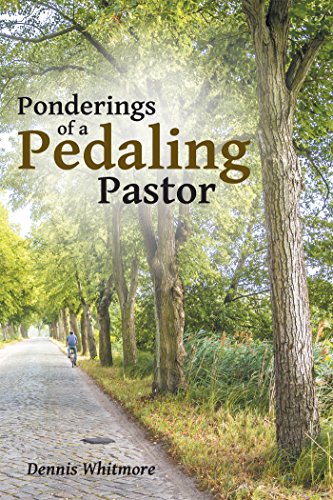 “Every path we take leads to a crossroads eventually.  Options present themselves.  Denying some to pursue others is necessary.  Even doing nothing is a choice.  But if you don’t regularly check your compass for true north, you may find yourself lost along the way:

“Life constantly moves forward.  There is no reverse gear….it keeps going, and you have to go with it as it is.  That’s why in the Bible life is called a walk.”

“As I have watched many who ‘claimed the name’ embarrass that name and fall away, the message to me has been clear:  ‘Don’t follow my followers, follow me.'”

This is an engaging little book.  You can read it straight through, or read an essay a day as a devotional.  It will get you moving in the right direction.

Wow, it is hard to believe February has come and gone already.  We are all currently in the season of Lent, that period of sacrifice that leads up to the Good Friday, and thankfully Easter.

I hope you have found the posts this past month to be fun, enlightening and most importantly – true to God’s word.  For the month of March it seems appropriate to talk about direction.  You know what I mean – Are you sure where you are going?

Let me put it another way – Are you in the non smoking or smoking section?

Follow us this month and let us help you figure it out if you are not sure.

God Loves You And So Do We