In the time of Moses, God led his people in a very visible way. There was the burning bush, the storm on Mt. Sinai, and the pillars of cloud and fire. The big theological word for this is theophany.  Sometimes we wish God would act in the same way today.  Wouldn’t it be easier if we could actually see God?  If we could all just get in our cars and drive off in a convoy with God leading the way?  Wouldn’t we be less likely to go astray?  Surely we’d get things right if God would just make himself plain.

The thing is, He has.  For one thing, we have His word, the Bible.  It has plenty of instructions the ancient Israelites had to do without.  We also have the example of Jesus.  Jesus was the ultimate theophany, God made man.  The Israelites didn’t have Him either;  they had Moses, a prophet, but just a man who spoke with God, not God Himself.  So what is our excuse?

Well, it’s true that we’re only human, filled with original sin.  The best of us can misunderstand, be tempted, or lose our way.  However, in the long run, we don’t have an excuse.  Most of the time we know we’re not following our leader, because we simply chose to go our own way. We’re no different than Adam and Eve who decided it would be okay to eat that fruit because it looked desirable.  We’re no different than the people in the days of the Judges who “did what was right in their own eyes.”

So what should we do if we’re really intent on following God?  Read His word — He gave it to us for a reason.  Take it as it stands.  Don’t try to weasel out of what God has made clear.  Imitate Christ.  The Bible says He was tempted, just as we are, but did not sin.  Pray.  Lay your decisions at God’s feet.  Communicate your fears, frustrations and hopes.  God is the leader who won’t let you down;  but you have to follow. 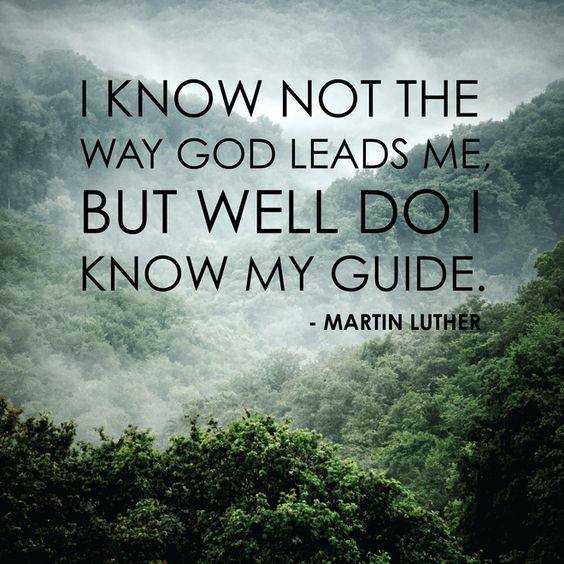 “God cares for you intimately, but is never thinking only of you.  His plans are always bigger than us, and that is for our ultimate good.”

From “Climbing with Abraham” by David Ramos

A few days ago, I read the quote above in a devotional I’m using.  It went on to say how Abraham, at the end of his life, had only one legitimate heir and a burial plot in the land where God had taken him.  He didn’t see the fulfillment of the promises God had made to him.  He never knew that one of his physical descendants would be Jesus and his spiritual descendants, the Church.

Then I went to a Gideon breakfast with my husband.  A man spoke about how he found a Gideon Bible in what he described as “a roach motel.”  In two years he had read the entire Bible.  He became a Christian, then a pastor.  He started a new church and now that congregation sponsors missionaries in 6 countries.  The Gideon who placed the Bible will probably never meet him.

Martin Luther nailed his 95 theses on a church door.  He expected to open a dialog that would lead to some reforms in the Catholic church.  He had no idea it would lead to new denominations, printing and translation of the  Bible into numerous languages, an increase in public education, etc..

We can only follow God’s leading one step at a time.  We are “living stones” in God’s plan, but we will only see a small piece of our part.  Maybe we’ll even think we have failed to accomplish anything. Lucky for us, we’re not in charge.  If we’re faithful, God will use us in ways we can’t even imagine.

So, if you’re discouraged, take heart. You’re part of God’s plan, just like Abraham, Martin Luther, and the Gideons.  He loves you and so do I!