“…behold an angel of the Lord appeared to him in a dream, saying ‘Joseph, son of David, do not fear to take Mary as your wife, for that which is conceived in her is from the Holy Spirit. She will bear a son, and you will call his name Jesus, for he will save his people from their sins. …When Joseph woke from sleep, he did as the angel of the Lord commanded him:  he took his wife, but knew her not until she had given birth to a son.  And he called his name Jesus.” Matthew 1:20b-21; 24-25

We’ve talked about Mary this month, who was indeed God’s servant, but today I thought it would be appropriate to mention Joseph.  His sacrifice for God was also great.  No doubt he endured some disapproval and/or ridicule for marrying an already pregnant girl.  Later, after another God-sent dream, he flees with the family to Egypt, abandoning his home, friends and livelihood.  He does all this without complaint or questioning.  He doesn’t hesitate or procrastinate.  In fact, He never speaks!  The Bible does not include a single word spoken by Joseph. What we do have is a record of his action — obedience.  God knew the kind of man He wanted to raise His son;  a man who understood servanthood and could model it for Jesus as He grew up. 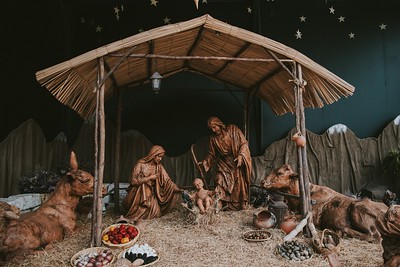 It is humbling to realize how far I fall short of this ideal.  Often I obey, but in a slow and grudging manner.  I whine about my circumstances and wish for an easier life.  I don’t usually want to suffer or sacrifice, even if it’s for the good of others, even if it seems to be God’s will.  If I’m honest, I’ll have to admit that I’m more like Jonah than Joseph.

So today, of all days, amidst the gifts and the feast, the visiting and rejoicing, I need to take time to meditate on the lives of Joseph and Mary, God’s faithful servants.  The people who raised Jesus, the God-man who lived and died as a servant to all of us.  I’ll remember what truly pleases God.

“Has the Lord as great delight in burnt offerings and sacrifices, as in obeying the voice of the Lord?  Behold, to obey is better than sacrifice, and to listen than the fat of rams.”  1 Samuel 15:22

God doesn’t want us to be “good” people;  He wants us to be His people. Dear readers, I wish you a Merry and Blessed Christmas.  Go in peace;  serve the Lord.

Many people love the modern carol, Mary Did You Know.  In fact, at our recent Christmas Luncheon for the women of the church, somebody asked if it could be sung on Christmas Eve. Beth Ann’s post about Mary, a servant of God, made me think of it.  It seems appropriate to both our theme and the season. Here’s the story behind the song as told by the author Mark Lowry.

“In 1984, Jerry Falwell called and asked me to write the program for their next Living Christmas Tree.

As I wrote the ‘speaking parts’ I began to think about Mary. I have always been fascinated with the concept that God came to earth.

…As my mind went back to the manger scene, I began to think about the power, authority and majesty she cradled in her arms. Those little lips were the same lips that had spoken worlds into existence. All of those things were contained in the young child lying quietly on her bosom. Even now, he was the very one who had given life to his mother, Mary.”

And for those who know and treasure it, and for anyone who hasn’t heard it yet, here’s the song.