It’s August already, where has the summer gone? With the new month, it’s time for a new theme, and the one that God has presented to me is — Journeying with Jesus.

The Bible is full of journeys. Abraham sets out into the unknown at God’s command; Jacob’s family moves to Egypt to escape a famine, and later into the promised land to escape slavery; Jesus travels the countryside proclaiming the Kingdom of God and finally to Jerusalem to meet His fate; some of His disciples meet Him on their trip to Emmaus after His resurrection. Paul, the famous missionary never stops moving as he plants churches throughout the Roman world!

The entire life of faith is a journey — sometimes we find ourselves in the desert, and other times we celebrate on the mountaintop. Mostly, though, we just plod along, putting one foot in front of the other. As long as we’re alive, we’re never standing still. Wherever our journey takes us, Jesus is there. I hope this month will be a time for all of us to take stock of our lives; to remember the places and people we’ve visited, and to reflect upon how each place and each person has been an opportunity to grown closer to the Savior.

So journey with me this month and always remember, God loves you and so do !! Keep walking!

One of the books I read recently (Chasing Francis by Ian Morgan Cron–Book Review) posed this question: when you consider your spiritual life, are you a pilgrim or a tourist? In case you’re asking yourself what’s the difference?, here are some of my thoughts.

A pilgrim is on a sacred journey; a tourist is just looking for a way to pass the time pleasantly.

A pilgrim doesn’t rush but takes time to consider how God may be speaking to him or her. A tourist tries to pack in as many activities as possible and is often distracted.

A pilgrim travels lightly. A tourist accumulates lots of souvenirs

A pilgrim does his or her own research. A tourist is content to adopt the opinions of the tour guide.

A pilgrim learns from the journey, and changes. A tourist goes back to the same way of behaving.

A pilgrim chooses activities that lead to growth. A tourist makes decisions based on what is fun and easy.

A pilgrim persists when the going gets tough. A tourist gives up and leaves.

A pilgrim strikes up relationships with other pilgrims along the way. A tourist stays with the tour group.

Do you get the idea? You can take your spiritual life seriously, pay attention, and be transformed. Or you can settle for Christian entertainment and remain a practical pagan. Which will it be? Are you a pilgrim or a tourist?

For more on spiritual growth see these posts:

Are You a Spiritual Person?

“Let us rejoice and exult and give him the glory, for the marriage of the Lamb has come, and his bride has made herself ready;  it was granted her to clothe herself with fine linen, bright and pure–for the fine linen is the righteous deeds of the saints.  And the angel said to me ‘Write this:  Blessed are those who are invited to the marriage supper of the Lamb.'”  Revelation 19:7-9

I just finished a book that I picked up, never imagining it would have anything to do with our monthly theme.  It’s called real SEX (subtitle: the naked truth about chastity) by Lauren Winner.  I ordered it from the public library because I have read other books by this same author.  She was a Jewish girl who converted to Christianity, and her first book, Girl Meets God, is about that spiritual journey.  She is very honest in describing her own sins and struggles, and she tackles difficult theological questions in a way that, for me at least, clarifies and illuminates.

Lauren says she began real SEX determined to talk about the issue of premarital sex;  how it is a difficult teaching for all young, single people, and particularly for someone like her who was already sexual active at the time of conversion.  She didn’t intend to write about marriage.  However, as she got into her subject, she came to the conclusion that she couldn’t talk about premarital sex without talking about marriage.  That’s because the real reason to avoid sex outside of marriage has to do with what God intended marriage to be.

God meant marriage to have three qualities.  It is unitive — that’s the whole “one-flesh” idea.  Marriage is a school for learning how to become “one” in relationship with another person.  It is procreative — and therefore, the building block of the family and of society.  Finally, it is sacramental because it is a meant to represent the union between Christ and the church.  Check out this reading from Ephesians 5:

“For this reason a man will leave his father and mother and be united to his wife, and the two will become one flesh.  This is a profound mystery–but I am talking about Christ and the church.”

Marriage teaches us, the church, what the kingdom of God will be like in eternity– an intimate union with Christ.  With this idea, I’m finally going to come to the point of this post.  One of the authors’ conclusions deals with a question we’ve all had to deal with about heaven.  The fact that there will be “no marrying or giving in marriage.”  This has always bothered me.  After a long, life of being married to one man, in heaven he’ll be just another guy?  How can that be? It doesn’t seem right.  Well, as Winner explains, in heaven the only marriage will be between God and His church.  As part of the body of Christ, we’ll be joined to each other and to Him in a union that is so complete, we won’t need anything else.  Earthly marriage simply points to this greater unity we as believers can look forward to. It’s a way for us to practice intimacy and unity right now.  Awesome, isn’t it? 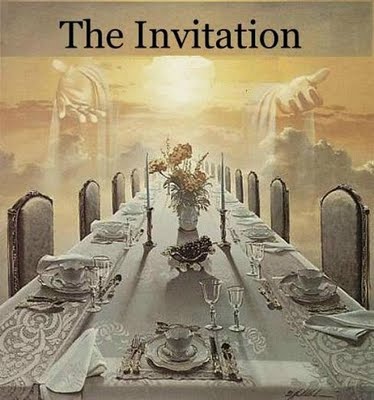 I’m looking forward to that Marriage Feast more even more now than I did before.  What about you?  Have you really thought about marriage in this way?  Does it help your understanding of Biblical teaching about marriage?  I’d like to hear others comment.