This quote from my daily devotional reminded me of a previous post– Take It With You.  It also fits with our theme this month, since the resurrection is God’s ULTIMATE victory over the evils of sin and death.  The author is  Rev. John Ellerton (1826-1893)  who was English hymn writer. Take the joy and confidence he speaks of with you wherever you go.

“If you come to seek His face, not in the empty sepulcher , but in the living power of His presence, as indeed realizing that He has finished His glorious work, and is alive for evermore, then your hearts will be filled with true Easter joy, and that joy will shed itself abroad in your homes.  And let your joy not end with the hymns and prayers and the communions in His house.  Take with you the joy of Easter to the home, and make that home bright with more unselfish love, more hearty service;  take it into your work and do it all in the name of the Lord Jesus;  take it to your heart, and let that heart arise anew on Easter wings to a higher, a gladder, a fuller life;  take it to the dear grave-side and say there the two words, ‘Jesus Lives!’ and find in them the secret of calm expectation, the hope of eternal reunion.” 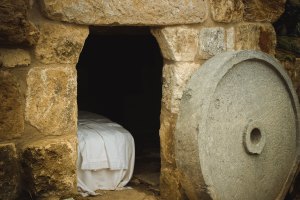 The angel said to the women, “Do not be afraid, for I know that you are looking for Jesus, who was crucified.  He is not here; he has risen, just as he said. Come and see the place where he lay.  Then go quickly and tell his disciples: ‘He has risen from the dead and is going ahead of you into Galilee. Matthew 28:5-7

Even though there is not a verse that specifically says, “tell one another” I believe it’s something we need to do;  not just on Easter morning, but every day. Martin Luther said:

“We need to hear the gospel every day because we forget it every day.”

Maybe this falls under the admonishment to “instruct one another.” We Christians need to constantly hear the Gospel — Jesus Christ, died and risen for us. So greet one another this morning with the Easter greeting:  “He is risen.  He is risen indeed.”

Most of you are probably familiar with the hymn, In the Garden, but you may not know how it came to be written.  This story of it’s origination comes from the book, Then Sings My Soul, by Robert J. Morgan.

The author of the hymn was a pharmacist named C. Austin Miles.  He began writing gospel songs and became an editor of hymnals and songbooks, as well as a music director for camp meeting, conventions and churches.  His hobby was photography and he found his darkroom to be the perfect place to read the Bible and meditate on the Scripture.  One day in 1912, while waiting for some film to develop, he turned to his favorite chapter of the Bible, John 20, the story of the first Easter.  Here’s his report of what happened:

“As I read it that day, I seemed to be part of the scene …A woman in white, with head bowed, hand clasping her throat as if to choke back sobs, walked slowly into the shadows.  It was Mary.  As she came to the tomb, upon which she placed her hand, she bent over to look in and hurried away.  John appeared…then came Peter….As they departed, Mary reappeared, leaning her head upon her arm …She wept.  Turning herself, she saw Jesus standing;  so did I.  I knew it was He…..Under the inspiration of this vision I wrote as quickly as the words would be formed the poem exactly as it has since appeared.  That same evening I wrote the music.”

I never knew until I read this book that the hymn was referring to the meeting of Mary Magdalene and Jesus in the garden after His resurrection.  Here are the words:

I come to the garden alone
While the dew is still on the roses
And the voice I hear falling on my ear
The Son of God discloses.

And He walks with me, and He talks with me,
And He tells me I am His own;
And the joy we share as we tarry there,
None other has ever known.

He speaks, and the sound of His voice,
Is so sweet the birds hush their singing,
And the melody that He gave to me
Within my heart is ringing.

I’d stay in the garden with Him
Though the night around me be falling,
But He bids me go; through the voice of woe
His voice to me is calling.

Does the story of the hymn, and the Scripture put a fresh perspective on the words for you?