Thomas Merton’s conversion to Catholicism is detailed in his famous autobiography, The Seven Story Mountain.  He eventually became a Trappist monk.  This book by Mary Gordon focuses on Merton as a writer, and will mainly be of interest to other writers (and English major types, like me).  If you haven’t yet read much by or about or Merton, don’t start with this one.  You will get bits of her personal life, but not in a linear way. 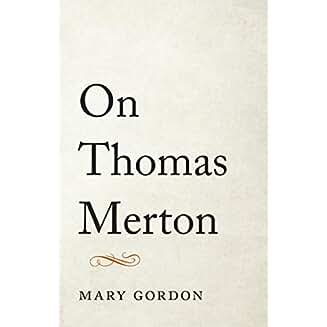 Thomas Merton was a man of contradictions.  As a contemplative and Trappist, he was called to silence;  at the same time his vocation as a writer encouraged him to have a strong voice.  In fact, he was often under pressure from his superiors to “produce” more books to earn money for the monastery.  He doesn’t seem completely comfortable as a monk;  yet he can’t escape his love for Gethsemani and his calling to the community there.  It was an integral part of his personality as a man and as a writer.  Gordon says,

In this short book, Gordon discusses at length a novel entitled My Argument with the Gestapo, written by Merton in 1941 and unpublished until a year after his death.  She also includes some of his correspondence with other writers, including Evelyn Waugh and Czeslaw Milosz (a Polish poet).  If you’re not interested in writing, you’ll bog down in these literary discussions.  You’ll also learn, if you didn’t know, that Merton wrote poetry at times.

Gordon saw Merton’s journals as his greatest accomplishment.  They contained his greatest writing and were the form to which he was best suited.  She describes him as “ardent, heartfelt and headlong.”  His passionate relationship with God is what comes through consistently.

My verdict?  Two stars.  This book won’t have a wide appeal.