This is another book I’ve had for a while, and am just getting around to reading.  As usual Thom Rainer does not disappoint, and not only that, Simple Church has a lot to do with our monthly theme, clarity.  Don’t tell me God doesn’t guide my reading!

What Rainer and Geiger describe is not a new church model — it’s about designing a process for discipleship.  That process should be simple, and involves four key steps and words:

The authors make the point that many church leaders and members are involved in so many programs that they have little time for real ministry.  The programs often compete with one another, and lack an intentional process for spiritual growth.  Becoming a “simple” church may actually involve eliminating activities that do little to further true growth in discipleship.

There are examples from real churches and quite a bit of statistical jargon and information (the authors admit to being research “nerds”).  I found their arguments logical and compelling.  It is an interesting perspective and one I had never considered.  As a member of a small congregation where many are scrambling to get things done, the idea that less is more is certainly appealing!

The point is made that the process is not necessarily easy.  When congregations have become “complex” it is difficult to eliminate programs because of their history and the attachments people have to them.  It requires prayer and movement that is fast enough, but not too fast.  In other words, handle with prayer!

VERDICT:  5 STARS.  Well worth considering for pastors and leaders.

For more books by Thom Rainer see these posts:

Anatomy of a Revived Church by Thom S. Rainer–Book Review

Well, maybe it’s an exaggeration, but I just got back from a very good church meeting.  Surprisingly (or maybe not) there were a lot of the same people in this meeting as in the Worst Church Meeting Ever.  Truly, we are saints and sinners at the same time Saints and Sinners!

This was a meeting of the leadership team of our church.  We discussed a book, Scrappy Church, by Thom Rainer, which has been previously reviewed by the Lutheran Ladies.

If you belong to a small, declining church, you should read this book because it will give you hope for the future.

In this meeting we realized:

And more.  The same group of people who whined and complained and got angry, came together this time in a positive cooperative way.  Criticisms were constructive, not destructive.  No voices were raised.  I feel encouraged and uplifted.

How good and pleasant it is
when God’s people live together in unity!

As part of the Fanning the Flame process, various team members have been assigned to read books and write book reports which are then shared with everyone.  This one was written by my husband, Pastor Terry Culler on “Surprising Insights from the Unchurched” by Thom Rainer.  Want to know more about what Pastor Terry has to say?  Visit his blog, goodnewsforabadworld.wordpress.com.

Rainer, a well known Southern Baptist leader approached this study from an interesting perspective–rather than ask the unchurched what they would like to see in a church, he surveyed the formerly unchurched, those who had changed from unchurched to church members.  He asserts that this is a better indicator of the things churches should pay more attention to than the opinions of people who were probably never going to become church members.  The formerly unchurched were those who had not been in church except sporadically for at least 10 years. 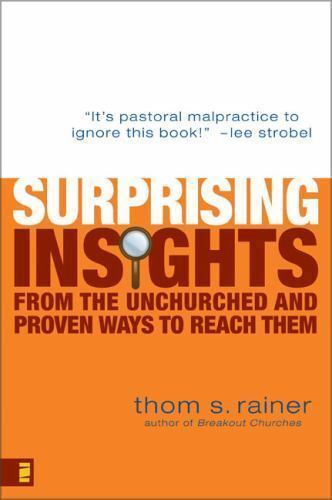 The people surveyed were from a number of different denominations and belonged to churches with different worship styles.  They were asked to put down which factors led them to join their congregations.  The two most frequently mentioned were Pastor/Preaching (90%) and Doctrine (88%).  The two least frequently mentioned were Worship style/Music (11%) and location (7%).  Other indicators in declining order were friendliness, a witness from somebody in the church, attendance by a family member, atmosphere, a relationship other than a family member, Sunday School, Children’s or Youth ministry, other group ministries.

The second part of the book deals with the leadership of pastors who are successful in attracting the formerly unchurched.  One of the sections in the latter part of the book focuses on how to become a church that attracts the previously unchurched and this can be summarized by the following:  be biblical, conservative and convictional;  give evangelism priority and passion;  provide deep biblical teaching; develop effective small groups; have a neat and clean church; seek excellence, etc..

What I got from this book is that we at St. Paul’s have a strong platform on which to build to make ourselves attractive to those who are seeking truth in a world filled with lies.