I checked this book out of the local library after I did a spiritual gift assessment with a young man at our church.  He is in college, and it turns out that he is very interested in philosophy and “deep thinking.”  I told him he might enjoy reading some Christian apologists.  No, this doesn’t mean people who apologize for being Christian;  apologetics is the branch of theology that deals with explaining and defending the faith.  I know some of the writings of C.S. Lewis fall into this category, as well as books by Lee Strobel (The Case For Christ).  I asked my husband for some other suggestions, and he mentioned Ravi Zacharias, which led me to Jesus Among Secular Gods. 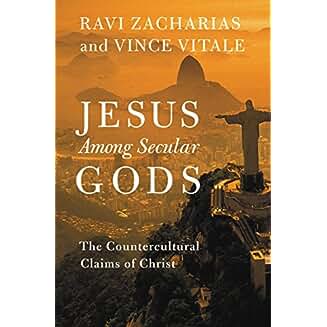 Dr. Zacharias is an Indian-born Christian who is well known as an author and has received numerous honorary doctorates in recognition of the impact of his work.  This book was co-authored with Dr. Vince Vitale, Director of the Zacharias Institute, who has been a Professor of Philosophy of Religion at both Yale and Oxford.

The book did not disappoint;  I think my young friend would like it, as would most Christians seeking to better understand secular philosophies and how to counter their attacks on Christianity.  Each chapter is written by one of the authors and presents various modern day approaches to the big questions of life — how we came to exist and why we are here. One major point Zacharias and Vitale make is that we are losing our ability to disagree in love.  Disagreeing should not lead to disrespect and demonizing. People today have become afraid to disagree, because they see it as a personal attack.  Only through open questioning and debate can people arrive at the truth and love one another despite differences.

The conclusion of the authors is that each secular philosophy contains a partial truth.  Below is a direct quote.

Relativism:  The partial truth is that refusing to see things from another’s perspective is dangerous and lacks love.  But we forget that this relies on there being an objective perspective according to which those different from us are valuable and worthy of respect.

Pluralism:  The partial truth is that no worldview has a monopoly on truth.  But we mistake this for all worldviews being equally true.

Humanism:  Human persons were indeed made for greatness.  But greatness results from divine grace and strength, not human self-reliance.

Hedonism:  Pleasure is good.  But it is not all that is good.”

Any Christian who reads this book will finish better prepared to explain why Christianity is the best answer to the questions of existence.  The material is clear and not too technical or academic for most to understand.

VERDICT:  I recommend this book and give it five stars!