This book was given to me by a friend who heard the author speak at a Christian Women’s breakfast.  She said her story was so riveting, you could hear a pin drop as she told it.

Grace Fabian and her husband, Edmund, served as Wycliffe Bible translators in Papua, New Guinea.  They lived for years among the Nabak people, working on a translation of the New Testament into their language, so that the gospel could be more completely shared with this tribe of 25,000.  As Edmund neared the end of this missionary project he was inexplicably murdered by one of his Nabak translation helpers. 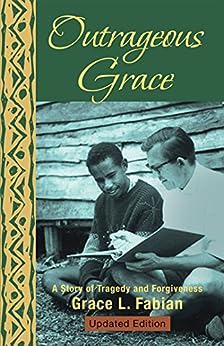 Outrageous Grace is the story of the Fabian family, before and after the murder.  It describes how the couple came to faith, met, married and entered the mission field.  After Edmund’s murder, Grace and her children continue his work, forgiving his murderer (who turned out to be mentally ill) and ultimately dedicating the Nabak New Testament amidst the joyous people.  Grace, in a special reconciliation ceremony becomes a sister to the murderer’s wife.

This is an inspiring true life account of faith, forgiveness and perseverance in God’s calling.  It is an honest portrayal of one family’s struggle to forgive in difficult circumstances.  The book includes study questions which could be used with a book club or in a small group setting.  I would recommend it, particularly if you have an interest in missionaries or Wycliffe Translators.  Readers, you can purchase it as Kindle book for only $3.99!  Mrs. Fabian now lives in Pennsylvania and you can visit her online at http://www.GraceFabian.com.